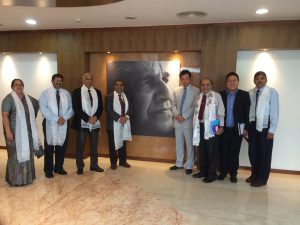 As part of the awareness campaign by the Central Tibetan Administration (CTA) on the Middle Way Approach, the Kalon of Health Dr. Tsering Wangchuk is currently touring the Tibetan settlements of  Hunsur and Bylakuppe and will give a series of lectures on the policy to initiate the public in the Umaylam campaign.

During his address, Dr. Wangchuk highlighted the remarkable achievements of Holiness the Dalai Lama for the Tibetan cause and world peace as part of the CTA’s initiative to dedicate 2014 as the ‘Year of His Holiness the Great Fourteenth Dalai Lama’.

At Manipal University, a pioneer private and public university in India, Dr. Wangchuk was accorded a warm welcome by the Director. He later met with the Vice Chancellor, PRO – Vice Chairman, Registrar, and the Dean, who assured the Minister that the university would be happy to conduct any short- or long-term courses in the field of public health and community health development for Tibetan nurses and health workers, employed in Tibetan primary healthcare hospitals managed by the Department of Health, CTA.

Dr. Wangchuk is also slated to visit the Tibetan settlements of Kollegal and Mundgod and will return to Dharamsala on 4 August 2014.