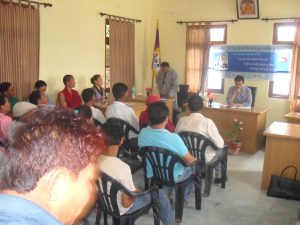 During the public talk, he touched on following topics-

1.         14 th Kashag’s three principles: Unity, Innovation and Self reliance and its importance to sustain Tibetan freedom movement and CTA.

3.         Umaylam-Middle Way Approach as the Best and win-win policy to resolve the issue of Tibet for both Tibetans and the People’s Republic of China.

4.         CTA Health Department and some its most important programs and health issues such as Mother and Child health, TB and MDR TB, Tibetan Medicare system, Hepatitis B, Health education, Substance abuse, Mental health and HIV AIDS.

The public talk was followed by a question and answer session.

Kalon also advised people to take full participation in Tibetan Medicare to protect themselves from high emergency health cost and support whole community and administration at the same time.

He told them that only with support of people and best use of it, Tibetan Medicare will become one of the best and self sustaining program of the administration. He also stressed that Tibetan Medicare is for, of and by the people.

The issues raised by the settlers at these settlements gained Kalon’s attention include water problems, toilets for poor families, waste management, need of resident Health worker for Kumrao settlement, poor condition of health centers and health staff quarters and etc.

The Health Kalon accompanied by Under Secretary Mr Nyima Gyaltsen.