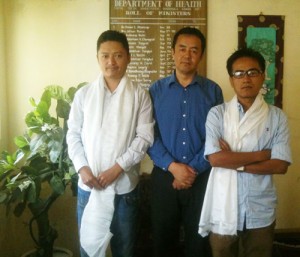 They completed their MBBS and Internship in June 2014 from Dr Rajendra Prasad Government Medical College, Tanda, Kangra, Himachal Pradesh.
The two doctors voluntarily submitted their services to the Department of Health to oblige with the central Tibetan Administration’s revised bond rules under the CTA Health Service.

Health Kalon Dr. Tsering Wangchuk congratulated them and expressed his hope that they wiould serve the Tibetan people to the best of their ability. Health Kalon also recounted how he always encourage Tibetan students, who are currently studying MBBS, to serve in Tibetan hospitals.

The Department of Health administers and finances primary health care and Medicare of Tibetans in exile in India, Nepal and Bhutan through a network of 7 hospitals and 43 primary health care centers and small clinics. Under the guidance of His Holiness the Dalai Lama, the Department also runs Ngoenga Home School for Tibetan children with special needs at Dehradun, northern India.

Currently, there are nineteen Tibetan allopathic doctors working in Tibetan settlements and institutions across India.

The appointment of doctors came as a result of the Health Department’s intensive outreach to Tibetan doctors in India, with the support of the Kashag and other departments.

The Kashag has approved reduction of obligatory service duration of CTA’s MBBS reserve seat bond from Three years to two years for Tibetan doctors willing to work in remote settlements like Miao, Odisha, Mainpat, Ladakh, Bhandara, with effect from 21 July 2014.
Currently, there are 16 Tibetan medical students and interns studying in Indian Medical colleges at Bikaner, Shimla, Tanda-Kangra and Kolkata who had signed the MBBS bond of Central Tibetan Administration. Next year, Five out of them are going to complete MBBS and Internship; Dr.Tenzin Norsang from Tanda; Dr.Ngawang Tsetan and Dr.Tenzin Tsomo Tenga ( Ms.) from Bikaner; Dr.Kunga Tselha (Ms.) from Kolkata; and Dr.Tashi Namgyal from IGMC, Shimla.

And there are still eight Tibetan MBBS doctors (three from Mundgod, and one each from Manali, Kollegal, Sonada, Dharamsala and Nepal) who are yet to oblige with the legal terms and conditions of MBBS bond, to provide their services to the Tibetan community.