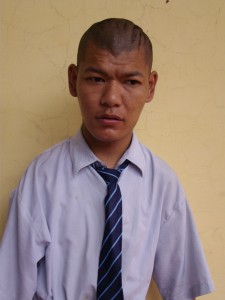 Tenzin Jampa belongs to a family of 7 members that includes 3 girls & 2 boys. His father is a retired serviceman and due to certain conditions he is not getting pension. After birth, Jampa is recorded as having water in the spinal cord that was sucked after few days. At the very age of 3 months, Jampa became victim of meningitis that was succeeded by epilepsy. At present, he is taking both the tuberculosis and epileptic medicines. He is also a case of cerebral palsy and a hemiplegics with speech impaired having physical disabilities.